By: Ed
In: Backpacking

Denali National Park & Preserve encompasses over 6,000,000 acres. The elevation ranges from 1,746′ at the Visitor Center to 20,310′ at the top of Denali, the highest point in North America. For the backpacker, these 6M acres are broken down into 87 units, or sections, 41 of which have a quota for the amount of people that can camp there each night. Choosing your unit or units is where planning begins.

Choosing a unit depends on what type of adventure you desire. For the purposes of this post, I’ll stick to the adventure my son and I planned, and I’ll provide the links and resources that will let you choose you’re own wilderness outing.

The first place to start is the Denali National Park Service’s “Guide to Backpacking Units.” This page has a topographical map and links to descriptions of each individual unit. For a larger overview, I used the National Geographic Trails Illustrated map of Denali National Park and Preserve. Because my son is not an expert backpacker, I started by looking for areas adjacent to the park road that were relatively flat, but that included climbs that looked like they were less strenuous than climbing New Hampshire’s Mt. Washington. Then I started digging through the individual descriptions of each unit provide by the Park Service. When I found something that looked doable, I googled the unit. Especially helpful was finding YouTube videos of hikes posted by other hikers. The videos help rule out areas, but also give you an idea of the weather and the terrain (rocky river beds, swamps, impenetrable willows, spongy moss, and the inevitable stream/river crossing).

To further narrow down our choice of unit(s), I tried to figure out how to get there. Access to most of the park is limited to travel by bus (or foot). You can find an overview of the multiple bus options here. Generally, backpackers need to reserve a spot on the camper bus. How long you want to be on the camper bus is up to you. For example, Unit 36 is a 5.5 hour ride. The views along the way are spectacular, but 5.5 hours is a long ride on a bus over a gravel road. We chose to explore Unit 7, a 2 hour trip by bus.

Navigating in Unit 7 promised to be easy. After all, it consists mostly of a wide, brush-free gravelly river valley surrounded by open tundra hillsides. It’s completely above the treeline–essentially, when you exit the bus, you can look out over the unit, point to where you want to go, and start walking. But off the bat, two things tripped us up. First, the river wasn’t exactly where the map placed it. It has many braids, with the main channel too deep and swift for us to cross. Also, in some areas, if you were following it, it came hard up against steep slopes that were difficult to move past. Fortunately, there are enough areas where the river divides into more manageable streams to cross. After a few miles of hiking, which involved numerous crossings, we face another problem. Because the river bed generally straight and flat, almost its entirety is visible from the road, and camping is prohibited anywhere where you can be seen by those on the bus. The spots I had picked by looking at the map generally were not suitable. You could either see the road, or they offered no shelter from the nonstop wind. It was also taking longer to get where we wanted to go because of the unexpected river crossings and the unending battle with the wind. Time to make a decision.

Hiking in Denali involves hundreds of small decisions, and more than a few large ones. Our first major decision was to figure out where to set up the tent. We were tired. It was wet and windy. Our feet were soaked. We weren’t going to get as far as we planned, and we were ready to stop for the day. We had stopped near a 6 foot bluff that would have hidden us from view. But the wind was coming the wrong way, and it offered no protection. We looked around and took stock of drainages that might offer a place to duck in. Only one wasn’t choked with willow, but it was on the other side of the river. We’d have to cross one more time. Once we started climbing up the gully, we discovered that most of it was filled with rocks, and there were few flat spots. I was also worried that with the rain forecast for that night, we might get washed away with a flash flood. Also, we could not see above us–we could easily surprise a grizzly. We decided to continue to climb up and see what we’d find. Luckily, around the next bend, there was a flat, grassy spot situated about the dry stream bed which gave us a good view of our surroundings while allowing us to set up the tent without it blowing away. We decided to park it there.

The next morning, we opened the tent to see a heard of caribou up on the hillside. A coyote ran past, spooking them. It then sat down and bark at us. As we watched the coyote an the carbou, we saw a moving black spot high on the next hill. A view through the zoom lens confirmed it was a grizzly. Time to move. Unfortunately, we had hoped to take the high ridge back to the road but the grizzly helped changed our mind. We packed up and moved back down the river bed. As we picked up our bear canister, we startle some ptarmigan that ran into some brush. Later, we climbed a hill and found the grizzly had helped us out. Hiking on the tundra was like walking on a spongy mattress, and the ridge eventually terminated in a thicket of willows. We had tried hiking through those earlier–it’s not fun. Last we saw of the bear, it was walking through our campsite.

Arriving back at the road, which hitched ride with a bus going farther into the park. Well work the trip. Aside from the spectacular views, we saw a few more grizzlies, moose, caribou and Dall sheep.

All in all, it was just one night of backpacking. But it was an adventure of a lifetime that was found only in Denali National Park.

No comments to show.

Ed Peterman is an educator, a Licensed NYC Sightseeing Guide, and a New York State Licensed Guide for Hiking, Camping and Fishing. He and his wife, Stephanie, are based in New York City. 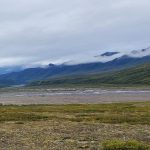